There is so much going on at Dyalog ’15. The general theme of the day was set with Morten Kromberg’s Technical Road Map. Dyalog is constantly refining and expanding APL’s capabilities and ease of use, quickly adding functionality to tie into new technologies, and adapting to emerging trends. Here are some highlights from the day: 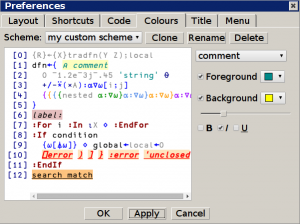 RIDE: A New Way to Interact with the Interpreter

Nick Nickolov gave a humorous and informative presentation of his big project – a brand new interface to Dyalog APL, separating the front-end from the actual interpreter. Built on established modern technologies, RIDE (Remote IDE) is inherently cross-platform, ensuring a quality front-end to Dyalog for all the systems that the future may bring. Nick inspired several old-IDE-using members of the audience to try out this new and upcoming interface.

While 14.1 did not bring many new language features like 14.0 did, there were many less visible changes. As the ratio between blue and red areas in the above chart shows, significant work has been done on performance: Jay Foad and Roger Hui enlightened us all with a peek behind the curtain on the challenges and pathways to improving Dyalog’s performance. 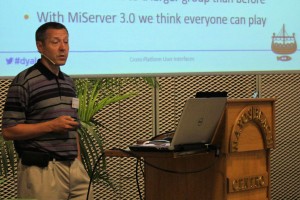 Morten Kromberg introduced us to MiServer, Dyalog’s new tool for creating UI that is rendered in a browser, and is therefore inherently platform-independent. MiServer is already very usable – in fact a number of brand new applications are under development. However, MiServer continues to be under active development – new features are on the way. 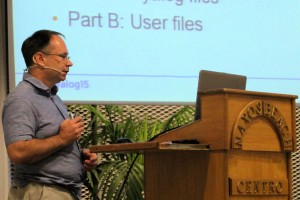 Richard surprised everyone (including Morten) with a working prototype of version 15.0 that included a whole suite of long awaited system functions that will make it easier to interact with the native file system in the same way on all platforms without code changes. Functions include (but were not limited to) listing of files, creation of folders, and automatic parsing of path-filename-extension strings.