Blog post from Presentation by Gianfranco Alongi from Ericsson AB

Those of you who have been following my blog posts from Dyalog User meetings the past couple of years, will know that I am a always alert when we take a departure from talking about ‘coding’ or ‘technology solutions’, and ‘target achievement in production environments’. And this is usually what Gianfranco is challenging us with in his presentations. Today was no exception.

In his pursuit of mastery for teams of programmers Gianfranco had been looking into the softer issues this year. Performing mob-programming where all team members share the same computer while solving problems issues with communication becomes very important. Gianfranco pointed us to Non-Violent communcation (also known as Giraff language) as a way to improve communication within a team and not least applied to one self as a mean to self insight.

Moving to Transparancy-  on a personal level this is about being more open as a person not hiding your emotions and your true self at Work.

Gianfranco used the Johari Window as illustration – inserted below: 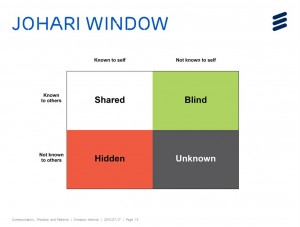 By allowing yourself to be more open about your personal life, feelings etc. team members can forge a higher degree of trust among each other – almost to the degree that they can feel like a ‘family’. The tool is an awareness tool to promote more openness between co-workers.

On a corporate level transparency is about making everyone aware of the company’s strategy and direction, enough to let it guide you in all of the decision you have to make on the company’s behalf every day.

Lastly: Practise makes perfect. How do we get better at the personal level. Gianfranco mentioned the now widely established fact that contrary to all business school knowledge money does not incentivise knowledge workers. On the contrary, trying to reward or using stick/carrot methods to achieve better performance with this Group of people slow them down. What does motivate “us” is Purpose, Mastery and Autonomy.

So to achive mastery in a team the most important things to be aware of is to make people feel part of something bigger  – and preferably beautiful –  and to allow them the freedom to nurse their mastery by practising alongside their work.

The most discussion afterwards was caused by a fact mentioned by Gianfranco – that intelligence tests and aptitude tests fail to reveal who will later become experts!
Only the amount of pratice determines whether you become really good at coding.