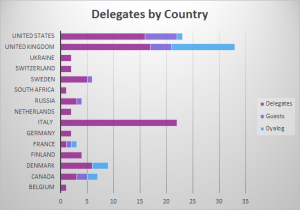 This year at the user meeting we have 106 attendees and a further 15 partners and guests, from 15 different countries worldwide.

Today was the first day of presentations and the day the user meeting opened formally.

Today also saw the arrival of the motion platform for the Viking challenge tomorrow and that’s been causing a lot of interest in the the reception area from everyone who’s seen it.

The past year has been a significant one for Dyalog. Version 15.0, which contains major new features and performance improvements over version 14.1, was released in June and is free for non-commercial use. Development is now well underway on version 16.0, which is expected to be released next year. Many of today’s presentations featured the Dyalog interpreter and applications – both to show what is available now, and to demonstrate what is to come. 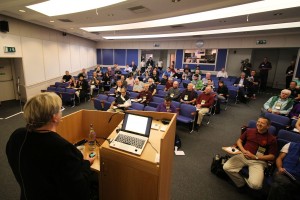 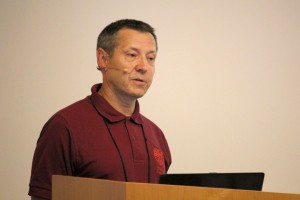 In addition, Veli-Matti Jantunen shared his APL journey from APL2 to Dyalog, and Tomas Gustafsson demonstrated Stormwind – an exciting preview of this year’s Viking Challenge. 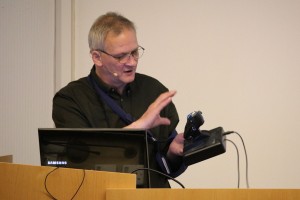 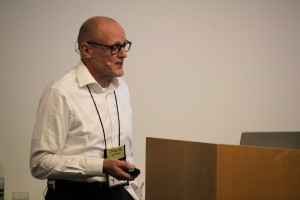 The International APL Problem Solving Competition, run by Dyalog and sponsored by APL Italiana, Fiserv and SimCorp, is a contest aimed primarily at students but which also has a special category for professional entrants. The 8th annual contest took place this year; there were four prize categories. The three student winners are presenting their solutions at the user meeting over three days – with their presentations also being streamed live over the internet at dyalog.tv. The first such presentation was today, the remainder will be tomorrow and on Wednesday, and the prize-giving ceremony follows on Wednesday. Each will be featured here, starting with today’s presentation in the next section. Many congratulations to the winners and all who took part! 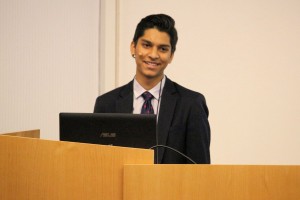 Josh David is a second year student, majoring in Computer Science at the University of Scranton in Pennsylvania, USA. He was introduced to APL when he interned with Paul Mansour at the Carlisle Group in Scranton. He won the Grand Prize in the General Computing category. His presentation, which was successfully streamed live at dyalog.tv and is still available to watch there, is discussed in one of Vibeke’s posts.

John and Roger presented the at operator (@), the where and interval index functions (⍸), and the tile operator (⊞).

Dyadic operator @ is at. It provides an elegant functional alternative to the procedural mechanisms of indexed and modified-indexed assignment.

Monadic ⍸ is where. For Boolean vector arguments ⍸ is a terse replacement for the idiom {⍵/⍳⍴⍵}; for higher-rank Boolean arrays ⍸ together with @ is useful for scatter-point replacement.

Dyadic ⍸ is interval index. ⍺ must be sorted and free of duplicates. ⍺ partitions the domain into contiguous disjoint intervals and ⍺⍸⍵ are the indices of the intervals which contain the cells of ⍵. Interval indices are bee’s knees as the left argument to the key operator ⌸.

The tile operator ⊞ is sometimes referred to as tessellation, moving window, or stencil code.  It is useful for neural network applications and for the Game of Life.

It was perhaps not a surprise that John Daintree’s title “The Airfix™ Model” was a smokescreen for something more interesting: Dyalog on Android. He showed us a number of Dyalog applications running on a number of devices – phones, watches and even televisions: 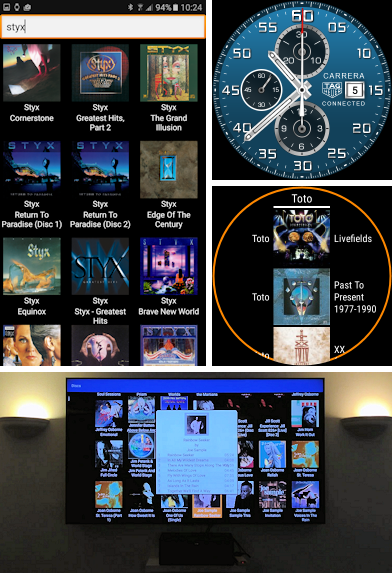 Dyalog on Android is not confirmed as part of the Dyalog suite. But it certainly looks exciting.

Some of the many other things we saw and heard today…

If you have any pictures from the user meeting you wish to share, please send them to dyalogum@gmail.com and we will make them available to all in due course.

Tomorrow continues to feature Dyalog APL, though this time with more emphasis on the applications that make use of it. The second competition winner’s presentation will also take place and be streamed live.

There will also be the Viking Challenge in the evening – an opportunity to try out Stormwind first-hand. For a preview of what’s on offer see this video!