Our 2016 Year Game was launched in January 2016 and ran until the end of the year. The idea was simple – to find APL expressions involving exactly the digits 2 0 1 6 in that order to equal the numbers 0 to 100 using the fewest characters possible. The minimum number of characters for an expression is 5 (the four digits 2 0 1 6 and a single primitive function/operator) so the smallest number of characters that a possible solution can have is 505. 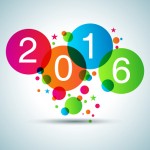 A lovely elegant solution was pointed out by Lars Stampe Villadsen:

These three each return all the numbers from 0 to 100. Not valid submissions for this particular game, but I did find them rather pleasing. Anthony Cipriano was inspired to go one step further and submitted an expression that creates the first 8 Fibonacci numbers:

It was clear early on that submissions fell into two distinct groups – those who wrote a program to find the expressions and those who derived their expressions manually. I found the creativity evident in the manually-derived solutions very satisfying; the results may not have been as terse as those resulting from programs, but the individuality of the creators shows people inspired by their subject matter. Who can fail to appreciate the thought process behind arriving at 96 using (×/+\+\(!2 0 1))+6 rather than the more prosaic ⌈⍟!20+16 or ⎕IO-⍨+⍨20+16 rather than 20+⌈○16 for 71?

Having said that, the goal was conciseness and individual character counts are now tabulated on the 2016 Year Game page; an amalgamation of the lowest-character expressions that anyone achieved can also be downloaded from this page. Congratulations to Jonas Stensiö and Veli-Matti Jantunen, who both achieved the same character count as the amalgamated minimum (693).

(most names omitted to protect the not-so-innocent)