This year once again the Dyalog User Meeting returns to beautiful Elsinore in Denmark. The historic seaside city is home to Kronborg castle, famously immortalised in Shakespeare’s Hamlet – and Kromberg castle, where Morten lives. We are holding the user meeting at Konventum in the western outskirts of Elsinore. It features winding corridors adorned with contemporary Danish art and many comfortable seating areas conducive to social engagement, so we hope that delegates will find themselves meeting new people and conjuring beautiful new ideas as the week progresses.

Social spaces are everywhere at Konventum

Today six half-day workshops were held, with topics ranging from source code management and graphical interfaces to cutting-edge APL techniques which have become available in the last decade of APL extensions in Dyalog.

Morten and Adam’s morning workshop focused on helping users collaborate on code with text-based source files. Adám introduced the ]LINK user command and Morten showed the way with Git – both guided the adoption of these technologies with worked examples.

We saw the delegates shine with their understanding of APL in the workshop on grouping and processing text. Nic helped us to understand the differences between ⊆ partition and partitioned ⊂ enclose. Powerful search and replace with ⎕R and ⎕S was elucidated by Richard Smith and, in this section, the ability of the participants to ask exactly the expected questions made the progression to understanding relatively smooth.

Brian Becker of the tools group and new recruit Josh David teamed up to introduce users to the new HTMLRenderer, which allows APLers to use web technologies to create cross-platform graphical user interfaces in Dyalog. 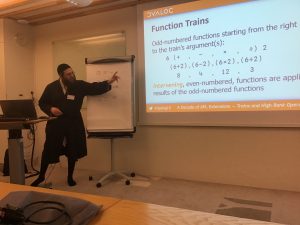 Adám points us in the right direction with function trains

Function trains are a relatively recent addition to the APL syntax, and with their terseness people can find them daunting both to read and write. However, once again we saw delegates stepping up to the challenge and finding creative ways to solve problems. It was a joy to see the creativity on display and the variety of approaches people took to solving the problems using only function trains. Marshall gave some details on the use of the rank operator ⍤, and despite this formidable challenge of understanding, by the end people were starting to grasp the power of this operator.

The morning’s HTMLRenderer workshop was mirrored by another GUI workshop in the afternoon. Michael and Chris Hughes worked to help people take their ⎕WC graphical interfaces, for Microsoft Windows, and get them to work on MacOS and Linux by using their qWC functions.

The mainframe is now the cloud, and with the ability to share great computing resources has come the need to learn another sizeable set of technologies. Morten and Norbert Jurkiewicz helped to clear some of the fog on this recent computing paradigm.

For the rest of this week there will be many presentations from Dyalog employees and users – as well as an APL Team Challenge, the Viking Challenge, and of course the Banquet dinner on Wednesday evening.

We will be continuing to publish short daily recapitulations to give you a flavour of the talks and events of each day. However, if you are too impatient even for that, we will be streaming Monday morning’s talks live from 09:00 to 10:45 (07:00 to 08:45 UTC). Also, on Wednesday morning between 11:00 and 12:00 (09:00 to 10:00 UTC), the 2019 APL Problem Solving Competition will be concluded as this year’s grand prize winner Jamin Wu will be presented with his prize and will talk about his experience with the competition. These streams will be available to watch live on dyalog.tv, so make sure to tune in if you don’t want to wait until the talks are published later this year.