Last night Roberto Minervini and his students Pietro Pio Palumbo, Gabriele Meroni and Alessandro Laselli of Liceo Scientifico GB Grassi Saronno conducted A Puzzle League – sneakily introducing us to another APL. The delegates were divided into teams who competed to solve 18 maths and logic puzzles, which could be solved both using APL and with good old pen and paper. The scoring system rewarded teams who solved puzzles that other teams did not solve, but it was soon clear that the real challenge was solving the puzzle whatsoever in many cases. The furious cognitive battle lasted long into the night but eventually the team “AdamsAPL” (Adám did not choose the name) beat “MKTeam” (Morten may well have chosen the name) to prove that, although Morten Kromberg is the CTO, he should be glad to rely on the problem solving capabilities of Dyalog’s employees.

Roberto and Pietro introduce another ‘APL’

Marshall shows us a bit of Dyalog ‘under the hood’

This morning the second day of talks commenced. While the first talk of the day had Marshall Lochbaum melting brains with the details of utilising CPU vector processing (among other techniques) for implementing fast reductions, the majority of the day’s talks focused on various tools for developing software applications with Dyalog.

Richard Park and Michael Baas gave an update on recent developments of the statistical package TamStat. The creator, Stephen Mansour, couldn’t be with us this week as he is using TamStat to teach his class at the University of Scranton, PA.

Erik Wallace gave us a view of the wide range of functions available in his cryptographic library Mystika. His talk mentioned promising work in combination with Aaron Hsu’s co-dfns compiler to give speed ups, as well as some of his own work on algorithms and implementation. Erik also expounded on some non-cryptographic use cases such as high precision squaring and inverses. 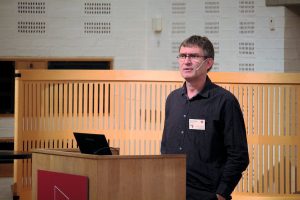 Stig Nielsen told us how SimCorp is moving Dimension to the cloud – an undertaking which requires that the business logic within its 2.5 million lines of APL code be moved from the desktop application to the server and run on multiple instances of Dyalog within a .NET process.

Asset and Liability Management has been getting more popular as the legal landscape changes and SimCorp Italiana have been swift to account for those needs. Francesco Garue gave an impression of the complexity of ALM and how SimCorp Italiana have been trying to tame their “pretty messy scheme” by, for example, removing the dependency on system-specific databases or tables.

Another asset management system was presented by Claus Madsen of FinE Analytics. Claus has been using Dyalog since version 6 so he has seen the evolution of APL user needs over the last thirty years. He showed us how he has been using .NET classes to allow his APL solution to integrate with other languages used by those he is working with, using an object oriented model to handle settings for various types of financial data. 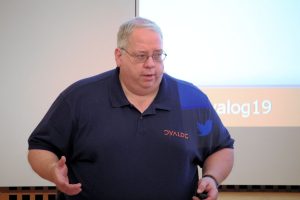 The HTMLRenderer has been developed to enable easy creation of cross-browser user interfaces using web technologies. Brian Becker drew some analogies between his granddaughter and HTMLRenderer over their respective developments, from sometimes making a mess (SYSERROR) to becoming more able to communicate over time (WebSockets). He then introduced some recent changes and additions to the way the HTMLRenderer is used in Dyalog 17.1. However, he also explained that MiServer sites would need no change to their code in order to run as a desktop application using the HRServer (HTMLRenderer Server).

Josh David has recently transferred from Dyalog user to Dyalog employee. Neatly segueing from Brian’s talk, he gave us a demonstration of the tools he has created which use the HTMLRenderer to quickly and easily create graphical elements in the Dyalog session.

And now for something completely different

Somehow COO Andy Shiers of Dyalog keeps improving the fireside chat, and this year has reached version 5! Jokes aside, his fireside chats are an opportunity to address a few points which might not fit into the scope of other individual talks. This year Andy informed us about why it is now really important that the interpreter knows its serial number, and gave us his usual smorgasbord of tips on subjects such as: the new Windows “backtick” keyboard enhancement, resizing the language bar, the memory manager I-Beam (2000⌶) and using ⎕NINFO on directories where there are inaccessible subdirectories. In return he asked the we send him examples of APL errors which would be made clearer with better DMX messages. 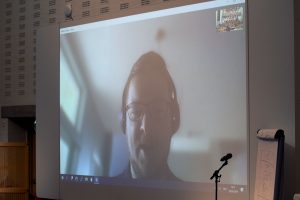 Excel and APL: A match made in Windows – now available cross-platform. As new recruit Nathan Rogers demonstrated, since modern Excel spreadsheets are zipped XML documents using the OOXML specification, Excel spreadsheets can be created directly from APL arrays on any platform. Unfortantely Nathan could not be here in person due to an important performance of Argentine tango with his wife conflicting with the User Meeting. However, he was still able to present via video-link – what a time to be alive!