For more than 20 years, Causeway has been developing APL tools to produce automated publication-quality graphics and typesetting. They differ from most modern technologies on mainly two points:

Following the emergence of the .NET platform in the 2000s, these products were fully refactored into a single package called SharpPlot; this is delivered both as a cross-platform APL workspace and as a stand-alone .NET assembly that can be used outside the APL world. The major benefit of doing this was that 20 years of patched-in functionality could be incorporated into a more consistent and better documented API (see http://www.sharpplot.com) – a side-effect is that the .NET assembly generally performs an order of magnitude faster than its APL counterpart. 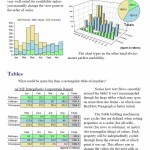 The main features of SharpLeaf are:

SharpPlot version 2.70 includes the first (alpha) version of SharpLeaf. SharpLeaf should be considered as being in its alpha stage (its API could change) with a GA release scheduled to be included with SharpPlot version 3.00 (due Q3 2015). Users are encouraged to try this alpha product and not only report any bugs but also provide feedback on the API and request enhancements. Please note that the SharpPlot engine is not expected to suffer any bugs with the addition of SharpLeaf as it is an independent product.

The alpha version can be requested by sending an email to support@dyalog.com