On Tuesday 29 March we hosted APL Seeds ’22, the second annual online event for new and prospective users of APL (although everyone was welcome). Once again we were delighted to see that the majority of registrants had little to no APL experience; it feels like we get the chance to offer that same sense of discovery we felt when first learning about the language.

APL Seeds ’22 began with an introduction from Dyalog Ltd’s managing director, Gitte Christensen, in which she described her experiences of seeing APL enable people who had real problems to solve and showed some of what Dyalog provides in terms of the tools and interfaces that people might expect from a modern software development stack. Gitte explained the new Basic Licence, which is another step forward in Dyalog Ltd’s aim to bring APL to a wider audience. The Basic Licence allows non-commercial distribution of Dyalog along with APL-based solutions under the terms of the Royalty-Based Run-Time Licence, which will apply as the default run-time licence (see Prices and Licences for more information on Basic Licences). She also described some customer use cases, some of which might surprise newcomers to this language. Rich Park finished the introduction by pointing out where you can find more APL content, especially if you’re just getting started. For example, our tips for beginners includes things that might not be obvious when you first start the interpreter or read introductory books. The video description for the recording of this presentation contains many useful links! 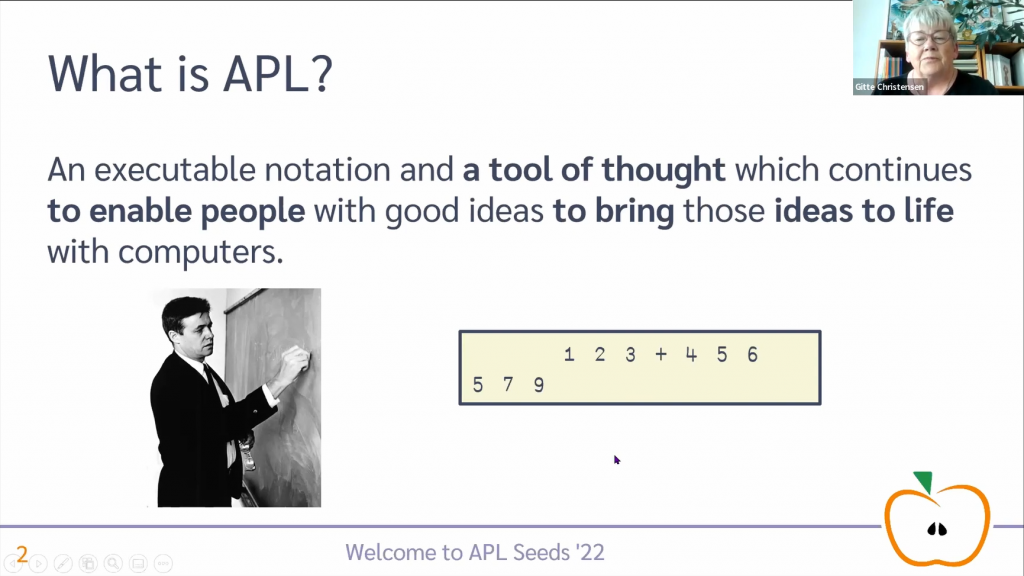 Gitte opens the event with her thoughts on “What is APL?”, including the short expression 1 2 3 + 4 5 6 that started the journey which eventually brought her to Dyalog.

Rich then presented a basic introduction to APL, showing the benefits of a symbolic notation for programming as well as demonstrating how to put together simple building blocks to build a function. After introducing the basic syntax, right-to-left precedence, and the generality of APL operators, along with a handful of symbols including the famous outer product (⍺∘.F⍵) and array indexing (⍺[⍵]), he walked through constructing a function that visualised the probability distribution for sums of rolling two N-sided dice. 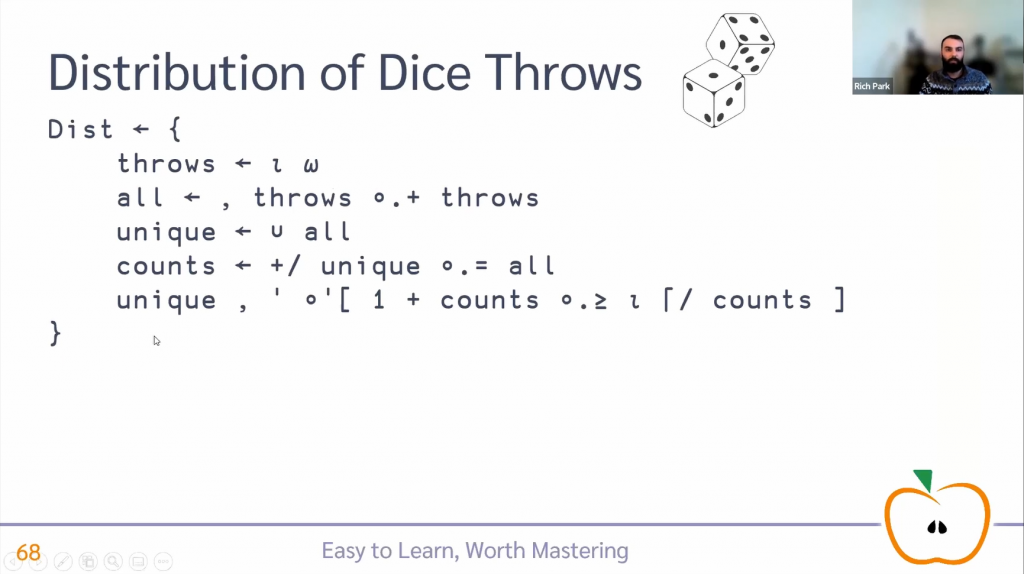 The Dist function uses just a handful of APL constructs to create a visualisation of a simple statistical distribution.

Stefan Kruger, author of the online book Learning APL, took us on an exploration of bioinformatics problems – a popular topic for the annual APL Problem Solving Competition. He described what a “k-mer” is (a chunk of DNA of a particular length), and compared different techniques for cutting up a text vector to isolate them from a DNA string, including a windowed-reduction (⍺F/⍵) and its generalised cousin, the stencil operator ((⍺⍺⌺⍵⍵)⍵), and our old friends the outer product and array indexing. Finally, Stefan looked at three approaches to doing some simple statistics in the Rosalind challenge “Computing GC Content“. To our delight, a new user who was in attendance commented that they learned new expressions and idioms that they had not seen before.

Andrew Sengul presented a more involved example, April. The April APL Compiler is a new entry in the APL field, compiling a subset of APL into the Common Lisp language and allowing APL functions to easily be used within Common Lisp programs. Andrew gave a concise history comparing Lisp and APL. He then gave a small introduction to using Lisp to write a “macro” (code that generates other code) before giving a glimpse into the implementation, architecture and design of APL in Common Lisp, as well as code that combines APL and Lisp to create visualisations. He showed a visualisation that used APL to both run Conway’s Game of Life and apply convolution kernels to show the state of cells over time. We loved seeing how he has been using April in the visual art installation Bloxl (a collection of computer-controlled light-up blocks used at events for a stunning visual effect). Andrew concluded his presentation with a demonstration of April code implementing a “falling block game”, and a video of that game in action.

The discussion began with the common beginners’ questions of keyboards, typing APL and whether you really need stickers, keycaps or a whole dedicated APL keyboard to use APL. On the topic of actually learning APL, there were mentions of even more books and other resources, including YouTube channels run by some of the podcast panellists and guests. All relevant links are included in the show notes for the episode, and you can listen to the episode on arraycast.com.

Taking a more technical turn, there was discussion of the balance between code clarity and performance. Should code be clear unless absolutely performance critical? Or is it possible to have both, where the clearer encodings and approaches are also the fastest? The episoded was capped off nicely, in response to a question from the audience, with Gitte offering her perspective on how APL can help a data analyst or engineer.

In the informal meet-up after the talks, Andrew configured a simple interface to the aforementioned “falling block puzzle game”, in which participants could control the game and see their moves played out on a Bloxl wall streamed in real (if a bit delayed) time. The players tried their best but were ultimately thwarted by the interface of clicking buttons using Zoom shared controls!

To those who attended, we hope you found the event enjoyable. Relevant materials have been uploaded to the APL Seeds ’22 webpage, including links to recordings of the presentations on dyalog.tv.