On July 16th, one of the most influential founders of what we today refer to as the “array language community” died peacefully, a few months after being diagnosed with lung cancer (link: Toronto Globe and Mail). 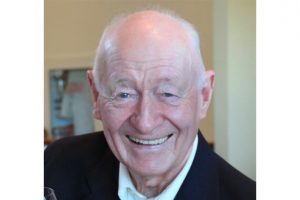 In 1964, Ian Patrick Sharp formed I.P.Sharp Associates (IPSA), together with six colleagues who were made redundant when Ferranti-Packard closed its computer division in Toronto, Canada. As Ian explains in a wonderful interview that was recorded in 1984 (link: Snake Island website), he was approached by people who wanted to recruit the whole team. Instead, he decided to form a company, since the team obviously had significant value.

The company was involved in the first APL implementation at IBM (APL\360). Subsequently, IBM allowed them to modify and enhance the system, and built a timesharing service that became known as SHARP APL. Roger Moore was a co-founder of IPSA and, in addition to being responsible for the supervisor that made SHARP APL a superior timesharing system, Roger was the chief architect of IPSANET, one of the worlds first packet switched networks.

In the late 1970s the combination of APL and IPSANET was revolutionary, and IPSA quickly attracted business from global corporate clients who used SHARP APL for e-mail, reporting and analytics, and a rapidly-growing collection of financial timeseries data – all completely new technologies at the time. In particular, the transmission of data over telephone lines changed the world. Ian had many absurd encounters with telecom monopolies who tried to protect old business models or profit from the new technology (link: archive.org).

A Stylised Map of the I.P.Sharp Associates APL Time-Sharing Network

Ian’s management style perfectly matched – and drove – the revolutionary technologies. As Ian explains so eloquently and humorously in the interview, IPSA recruited talented people without necessarily having specific tasks in mind. Ian set the tone and direction and then let people get on with it, moving around in the background to get a sense of how things were going and making adjustments without ever making a fuss. IPSA was a fantastic place to work and attracted a wonderfully diverse (in the most modern sense of the word) collection of smart people who developed revolutionary tools, helped a lot of customers, had a lot of fun, and made money.

Ultimately, IPSA was creative, problem-oriented and customer-driven to the extent that it failed to respond to fundamental changes in the market in time. At the end of the 1980s the timesharing revenues suddenly faded, and the company was acquired by Reuters for its timeseries databases and more or less disappeared overnight. However, IPSA had acted as a fantastic breeding ground for technology and talent for a quarter century, and there are hundreds of people who fondly and gratefully remember Ian for the way that he allowed them all to grow.

I don’t think it is a coincidence that so many of the active array language organisations have key players who were once IPSA employees (some of them appearing in more than one place thanks to relationships forged a very long time ago 😊).

As always, Roger has collected anecdotes about IPSA, Ian and other people who worked there, which you can find on jsoftware.com/papers/SharpQA.htm.

My Own IPSA Story

In 1978, my dad was moving out of an apartment in Oslo. At the same time, XEROX insisted that IPSA open an office in Oslo to support their international business, and several Canadians arrived there. I helped move some furniture and, sensing a keen interest and real excitement in programming, the IPSA Oslo team offered me a free account to play with APL timesharing, if I was interested. I effectively became a piece of furniture in the IPSA office after school, and had keys to the office so I could come and go as I pleased. After a year or so, they started throwing me bits of real work to do and paying me for my time. I think I was 17 at the time.

In addition to working as an APL consultant and tool builder, one of the things I did in my spare time was to write a tool for myself that would compare the entire contents of the e-mail directory with its state at the end of the previous week. Since IPSA was 100% managed by e-mail groups, this allowed me to know instantly when a new office was opened, a significant new project was started, and, of course, when new employees joined the company. By using this technique of harvesting e-mail addresses and sending unsolicited e-mail when an interesting project or person joined, I found my future partner both at home and the office – Gitte, the current CEO of Dyalog Ltd – only about 500km away in the IPSA Copenhagen branch.

I spent about a decade at IPSA and, after its sudden disappearance, Gitte and I have been trying to recreate the IPSA atmosphere in every team that we have been a member of. In a very real sense, I owe not only my career but almost everything of value about my life to Ian Sharp and the warm and welcoming company that he created.