Peter joined Dyalog Ltd in mid-July 2022, shortly after finishing his bachelor’s degree in Computer Science from Aalborg University in Denmark. He didn’t originally plan to look for a job so soon, but when he saw that Dyalog Ltd had an opening involving three of his favorite things (C programming, interpreters, and APL) it was too good an opportunity to let pass and he was offered the job after a couple of online calls and interviews. Peter and his girlfriend had planned to move to Esbjeg in the south-west of Denmark for a while, so he thought it was great that Dyalog Ltd made it possible to work from home. He joined just in time to be able to participate in Dyalog ’22, which meant that he met lots of customers, which he considered a great experience. 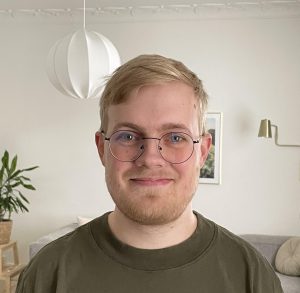 His interest in APL started while he was at university – at one point he thought to himself: “This language looks so strange and different that it might be worth learning.” After spending some time playing around with it and participating in the 2021 APL Problem Solving Competition, he started writing his own little APL interpreter, which he says must have been the point of no return for him. Even in the first few months at Dyalog Ltd, he has learned a great deal about the language and its quirks, and a lot about implementation techniques.

Peter hopes to be able to help develop the language in the years to come, and to make sure dfns get the love they deserve, as he thinks that functional programming is definitely the way to go!

Even though he is part of the “young generation” of APLers, writing long trains and doing code golfing in APL has yet to catch his interest.

When not working, Peter is likely to be found taking a long walk, or trying out something computer science related that has caught his interest. Often, the code he writes in his free time is for the Plan 9 operating system, which in his mind is so elegant and simple that it is almost a shame it has so few users.