At Dyalog ’15 John Scholes and I presented proposals for future operators cut, under, and merge. Following the release of the video of this presentation, we received some feedback from a user. Our response to the feedback may be of wider interest.

The November cycle of APL User Meetings is kicking off; the SWEDAPL meeting in Malmö was first this year, holding a meeting at the top of the famous Turning Torso in Malmö. Since it was just a short trip from our Danish office, Dyalog was represented by Gitte Christensen, Bjørn Christensen and Morten Kromberg – with Brian Becker and Dan Baronet joining the meeting remotely. Next week, Richard Smith and Nick Nickolov will be representing Dyalog at APL Germany in Erfurt and Dan Baronet at FinnAPL in Helsinki – check http://dyalog.com/dates-for-your-diary.htm periodically for a list of APL meetings and Dyalog presentations! 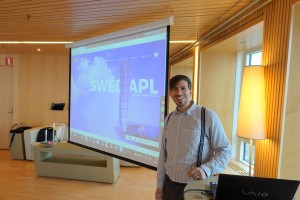 This turned out to be a very international group – ten Swedes (two of whom were from India but based in Göteborg), six Danes who made the trip across the sound, two from the UK, one German and one delegate from each of Serbia and the Ukraine – plus about five North Americans who joined the afternoon sessions via GoToMeeting. This was the first “themed” SWEDAPL meeting; all of the talks were related to the use of Web Services in APL.

First up was our host Gilgamesh Athoraya from Data Analytics in Malmö, who showed us how he had been using Paul Mansour’s new RUMBA application interface which is built on top of Dyalog’s TCP toolkit (which is known as CONGA). Gil has been experimenting with support for Web Sockets, which are bi-directional connections that allow the server to push data to web client applications, making it possible to have very responsive user interfaces in web applications. 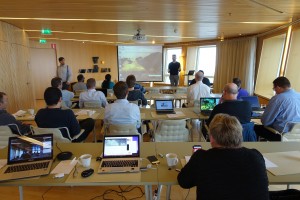 Joakim Hårsman explaining how slippery SOAP can be

The next presentation was by Joakim Hårsman of CompuGroup Medical, who have been exposing data held on IBM AIX servers via Microsoft.NET-based Web Services for many years. Joakim had a few interesting stories to tell about getting a grip on and maintaining Web Services based on the protocol known as SOAP, which is supposed to make this easy…

The last talk before lunch was by Stephan Poßberg of Vallourec, who talked about the use of Web Services to make computational code available across a large, global organisation. Lunch was served on the 54th floor; unfortunately the weather didn’t quite allow us to see all the way to Helsingør. 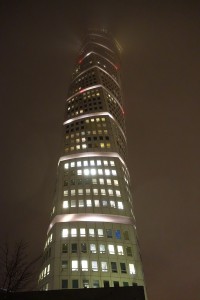 The Turning Torso in the Mist, After Dark

After lunch, it was Morten’s turn, assisted by Brian Becker (who joined the meeting from Rochester NY) to present Dyalog’s brand new support for RESTFul web services, available in MiServer 3.0. Paul Mansour also joined this session and provided valuable insights into REST technology, which seems to be taking over as the preferred Web Service architecture for new applications.

Finally, Peter Simonsson from Aplensia in Göteborg told us how Web Services had become widespread at Volvo Cars, where a couple of hundred APL-based services provide the backbone of a network of applications centered around product data and production planning – with the earliest web services dating back to the days when APL ran under VM on IBM Mainframes.

Many thanks to Gilgamesh, Data Analytics and Optima Systems for arranging this event, which provided much food for thought, and inspiration for future work by several people at Dyalog – and by the sound of it, a number of users of APL as well! Expect to see more support for Web Services and Sockets in future versions of Dyalog products!