Professor Kip Murray asked on the J Forum for the “unforgettable” times seen on a 24-hour digital clock.

The problem is that every number has something notable about it, so that each number is “unforgettable” and consequently it’s hard to remember any single one of them.

You may have heard of the following story about Hardy and Ramanujan. One day Hardy took a taxi to visit Ramanujan. On arriving, Hardy told Ramanujan that the taxi had the thoroughly unremarkable 4-digit number n on its licence plate. Ramanujan immediately remarked that n is the first number that … . I forget what n or the property was, something like n is the first number that can be written as the sum of two perfect cubes in two different ways, something typically Ramanujanian.

Yes, that was it:

Now that I have worked out the number I can find the story on the net. On hearing the story, J.E. Littlewood remarked that “every positive integer is one of Ramanujan’s personal friends”.

P.S. In my youth, when I needed to remember a (5-digit) number for a time, I computed its largest prime factor by mental calculation. Try it and you’ll see why it works.

Translated and updated from a J Wiki essay which first appeared on 2009-08-22. 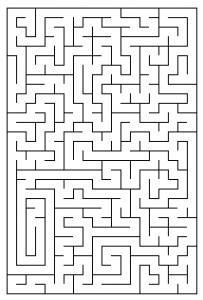 One of many things I like about APL is that it’s fun to use for recreational computing. I will frequently happen upon an interesting problem, puzzle, or piece of code and consider how I might implement it in APL.

I was thinking about how to generate mazes for an idea I have about a game to help kids learn APL (that may be a topic for a future blog entry). Anyhow, I found an interesting web page about maze generating algorithms where the author found one, the “Growing Tree Algorithm“, to be of particular interest. His page included roughly 100 lines Ruby code to implement the algorithm. The algorithm can be boiled down to:

Here’s a clip of the algorithm implemented in APL building a 10×10 maze.
Notice how whenever it hits a “dead end” it backtracks to the last cell that hasn’t been visited.

What might an APL approach to this algorithm look like? How to represent the maze? My first thought was to separate the maze generation from the drawing. After an hour (or so 😉 ) of tinkering, I’d come up with something that seemed to work pretty well and took about a dozen lines of code.

When I originally thought about writing this blog entry, I was going to launch into a discussion of the code and I realized that it might get lengthy and (egad!) boring. So instead, I’ll highlight a couple of the clever bits, show you the core maze generation code, and point you at the complete namespace for your own amusement and experimentation.

First the clever bits (at least I hope they’re clever)…

The core code for the maze generation looks like this:

You can get all the code in my maze generating namespace from GitHub. Save a local copy and use the SALT Load command to load it into your workspace, or just cut and paste it into your own namespace script with the editor. The maze namespace contains the following functions of interest:

For example: pic←1 draw mat produces a line-drawing of the maze generated in the example above

For example: h←html mat produces an HTML representation of the maze generated in the example above