Richard Park is the latest addition to the Dyalog team and is based at Dyalog HQ in the UK. Richard has been living in the same house in Bramley his entire life and recently returned to the village after one successful degree in physics at the University of Manchester, and one unsuccessful degree in education at Manchester Metropolitan University. 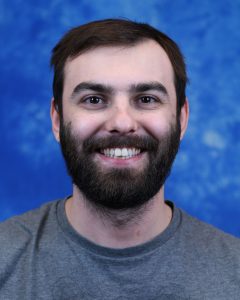 How Richard and Dyalog came to meet is a story that deserves to be told, albeit a bit embarrassing for poor Richard!

One day, while walking his dog and father, Richard rang the office doorbell to inquire about any software-related opportunities that might be available. He had developed an interest in computers from using them at young age, building circuits for A-level electronics and learning about the physics of computers (as well as computational physics) at University. If only Richard had been able to convey any of that to Jay Foad, who answered the door, instead of standing like a “gormless idiot” (his words) whilst his father jumped in and asked about internships and job opportunities…

Richard went home that evening and browsed the Dyalog website… the Pandora’s box of APL edged ajar and he began to imbibe the symbols. He also sent an amusing email explaining the earlier awkward encounter and clearly showing that he was not a “gormless idiot”. This resulted in a meeting with the CEO and CXO, Gitte and Morten, in October 2018. After that meeting Richard showed enough aptitude and interest, while pair-programming a simplistic physics simulation with Morten, that they decided to keep him.

Given that Richard’s previous experience includes programming an autonomous robot for the QMC team in the 2012 and 2013 Student Robotics competitions and using MATLAB and CERN’s ROOT library to process experimental data and run simulations, he was very surprised that he had never heard of APL before. He sees a potential in APL to develop domain specific programming languages and software packages to help teachers convey concepts in a way which more closely matches the syntax and jargon in which problems are already described.

In his new role at Dyalog, Richard is developing teaching materials and demos to promote APL.