In June, Mikhail Barash and Anya Helene Bagge published a collection of essays written by the students of the seminar course INF328B on History of Programming Languages that was given at the University of Bergen (Norway) in the Spring term 2021. As an author, I wish to start by thanking Mikhail and Anya and the students for this initiative! It is inspiring to those of us who have been in this game for a while to see young computer scientists who are interested in language design studying history – it definitely makes us feel that the effort put in to writing the paper was worthwhile!

Each essay summarised one paper from the HOPL IV conference (part of ACM SIGPLAN’s PLDI 2021). Two students wrote essays on the paper “APL Since 1978”, by Roger Hui and myself. At the end of each essay, students were encouraged to pose questions to the authors of the HOPL IV papers, and this blog post has essentially been written in response to those questions.

Karl Henrik Elg Barlinn asks:
“I wish to know if there are plans to try and popularize APL within the wider community of programming languages. I ask this because I see how it can be very useful for the mathematical community to write papers and be able to execute the notation.”

The APL community has always seen “evangelism” as an important activity, and that remains true to this day. It is a challenging task because the most successful APL users are neither software engineers nor mainstream mathematicians, but various types of domain experts who are able to apply mathematics and learned enough about programming to write high value applications with a lot of domain-specific content. Typical users have been actuaries and financial experts, operations researchers and planners.

Successful APL users are more likely to write papers at an Actuarial or Chemical Engineering conference, and typically lack the vocabulary and the insight into mainstream computer science to present APL to the “community of programming languages”. They also typically work in highly competitive industries and have little time or inclination (or permission) to publish their work.

The situation is improving: the growing interest in functional programming, and the general recognition by the software engineering community that there is value in combining different paradigms (as opposed to the bad old days when everyone thought that the world would soon standardise on C++ or Java), makes it much easier to interest the new generation in APL.

A new generation of APL users is emerging, who have more insight into Computer Science and are more able to bridge the gap. Examples of recent work include:

Dyalog Ltd recently introduced an event aimed at new users; recordings from the first of these meetings can be found at https://www.dyalog.com/apl-seeds-user-meetings/aplseeds21.htm.

In addition to the marketing efforts, Dyalog is working hard to add tooling that will open APL interpreters up to mainstream “devops” workflows, based on text-based source files. Historically, most big APL shops developed their own home-grown management systems (many of them pre-dating tools like SVN or Git by decades), and there has not been a lot of tooling shared by the community.

Given unlimited influence, I would push APL as a tool for education. I think it could be a useful tool for teaching mathematics – and how to use it to solve problems on a computer – starting with children. The simplicity of APL’s syntax means that it is also a good tool for teaching people of all ages and at all levels of education to manipulate data without just feeding it to ready-made packages. Teaching fundamental algorithms in computer science classes is also a good place to use APL, although the CS establishment will probably question that since APL tries to do most things without loops or type declarations, and sort of “skips over” the lowest level of algorithms.

APL is a useful tool for modelling, prototyping and designing solutions to any kind of problem. Obviously, many domains already have tools specifically designed for common types of problems. For example, Mathematica and MatLab have built-in solutions for many different classes of mathematical or engineering problems, TensorFlow for artificial neural networks, and so on. However, when the time comes to perform a major revision or extension, or there are no pre-built solutions, APL will be a good choice for prototyping.

Although APL is perhaps most valuable during analysis and design, the “executable design” is often used in production because APL interpreters are efficient on the relatively dense data structures that results from array orientation and because the ability of domain experts to write code (and tests) eliminates many sources of errors and poor performance due to unnecessary abstractions.

APL is not always an appropriate choice for the final production system. For example, I would not use APL to implement a real-time system, at least not using existing APL interpreters, which will freeze up to do compactions every now and again. For mission-critical systems, the additional safety provided by strong typing or other mechanisms for verifying correctness, and using teams trained to focus on reliability rather than analytics, may have benefits. If the core algorithms are not array-oriented and require a lot of looping or recursion, an interpreter may not be the right solution, and APL compilers are not yet mature technologies.

Even when the final production system is rewritten in another language, the prototype can be useful as a verification system, especially because the implementation is likely to be radically different, and can therefore almost act as a proof of correctness.

For an example of how APL can add significant value even when it is not used in the final implementation, see Martin Janiczek’s presentation at APLSeeds21, on “How an APL Prototype Helped Designing a Service”: https://dyalog.tv/APLSeeds21/?v=qDl3obmOd58.

“Q: Do you think APL with its glyphs is more fit to be taught in school than J, as special equipment is no longer an issue with UTF being widely adopted?”

There are still some problems related to APL symbols, such as many applications rendering the symbol ≢ incorrectly as a ≡ followed by a slightly offset / unless a supporting font is used. I suspect that it may be a while before we have handwriting recognition for APL symbols, or support for APL in writing systems for the visually impaired, and so on. On the other hand, one of the benefits of APL (which also holds true for J) is that it is independent of any particular human language, without needing to be translated from English.

Roger Hui commented in the HOPL IV Slack channel: “I am guessing that if the ecosystem for Unicode was more developed at the time (1990) Iverson would have kept the APL glyphs.”

Sondre Nilsen comments:
“If I would have some feedback it’d be to include an “array programming languages for dummies” appendix that could be used to look up foreign concepts, words and phrases that unfamiliar aspiring APL developers may not know.”

Hopefully the APL Wiki (https://apl.wiki) will be a useful resource, along with the (APLCart https://aplcart.info) and the evolving digital version of Mastering Dyalog APL. Please take a look at let us know if you feel more is required! 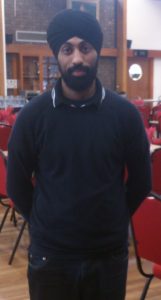 Karta joined Dyalog in April, and is yet to meet anybody in person although he’s been told that this is not necessarily a bad thing! After completing his doctoral degree in theoretical physics, Karta stumbled upon Dyalog and APL entirely by happenstance. Being often captivated by things that look unfamiliar to him, and having an interest in most things, it was a code golf question that was answered in a strange, yet mathematical-looking language that took him to the profile of the poster, who happened to mention they were employed by Dyalog and currently hiring. He sent an email enquiring about the opportunity and, several remote interviews later, was happy to be hired as a C/C++ developer working on the interpreter.

Karta is one of the few members of the team that knew no APL whatsoever before joining and has been very impressed by Dyalog and APL thus far; he is very much looking forward to seeing how far the language can be taken, with an eye to further developing and potentially encouraging its use in academia and other technical fields of study. 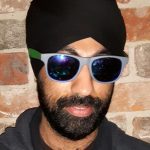 In his spare time, Karta enjoys expanding his knowledge of both scientific and technical pursuits, and tinkering around with software and hardware systems, amongst his eclectic interests. When not found reading papers or learning an unfamiliar branch of mathematics, he will be caught thinking of a new engineering project to occupy his time, or stumbling through learning a new language, or maybe just delighting in the latest vixra paper.